Pearl Gold
ZE:A (제국의 아이들, also known as Children of Empire) is a nine-member boy group formed by Star Empire Entertainment. They release their first single "Nativity" on January 7, 2010 and held their debut stage on Music Bank on January 15, 2010.

Under the name Child of Empire, following their appearance on Mnet's Office Reality , the group gained attention by performing various guerilla shows and creating UCC (user created content) videos. They have also appeared in a documentary-styled show Star Empire, and later getting their own documentary show titled Empire Kids Returns, showing them performing in wingcar performances around Seoul and training. The group faced controversy in December following the similarities of the group's name to Brown Eyed Girls's JeA. The group later changed the pronunciation of the name to avoid implications.

Releasing teasers beforehand, the group debuted with their first single album, "Nativity" under the name ZE:A, on January 7, 2010. Immediately they garnered attention, reaching number one on both the "Album Chart" and "Artist Chart" on Daum on their debut day.

The group made a comeback on March 17, 2011 with their first album Lovability and title track "Here I Am". 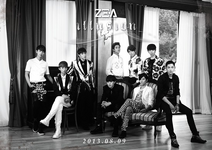