Yoo Seonho (유선호) is a South Korean singer and actor under Cube Entertainment. In 2017, he was a contestant on Produce 101 Season 2, finishing 17th. After the show's conclusion, he began his career as an actor until making his music debut on April 11, 2018 with the mini album Spring, Seonho. 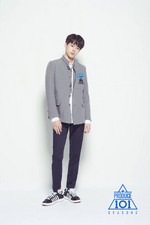 Retrieved from "https://kpop.fandom.com/wiki/Yoo_Seonho?oldid=147343"
Community content is available under CC-BY-SA unless otherwise noted.