Yong Junhyung (용준형) is a South Korean rapper, songwriter, producer, and actor. He is a former member of the boy groups Highlight (formerly BEAST) and XING. He made his solo debut on December 13, 2013 with his first mini-album Flower.

On March 14, 2019, he announced his departure from Highlight due to admitting his involvement with Jung Joon Young's illegal hidden camera sex footage controversy.[1]

Can You Feel It? 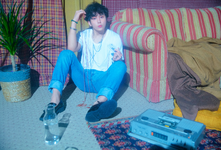 Retrieved from "https://kpop.fandom.com/wiki/Yong_Junhyung?oldid=129628"
Community content is available under CC-BY-SA unless otherwise noted.