ARIAZ
YeoRi (여리) is a South Korean singer under Rising Star Entertainment. She is a member of the girl group ARIAZ.

YeoRi first appeared as a trainee under Star Empire Entertainment under the stage name Choi Ji-yeon in the survival reality show MIXNINE in October 2017. However, YeoRi was among four trainees from Star Empire who did not pass the auditions.[1]

On September 16, 2019, Star Empire's affiliate label, Rising Star Entertainment, announced that Empire Girls would be officially debuting under the name ARIAZ in October.[2] The next day, YeoRi was the fifth member to be revealed through a teaser concept photo.[3] She officially debuted with the group on October 24, 2019 with the mini album Grand Opera. 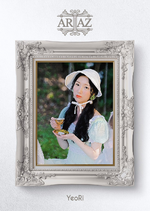 Retrieved from "https://kpop.fandom.com/wiki/YeoRi_(ARIAZ)?oldid=154809"
Community content is available under CC-BY-SA unless otherwise noted.