Daon and Dayul were members of the girl group Baby Boo, with Daon being a member of the original line-up and Dayul joining the group later on, in 2015, for their comeback "Kiss Me".

On July 17, 2018, Baby Boo's official Instagram and Twitter account's names were changed from "Baby Boo" to "DAONBIN". The two members left the group and company in August 2018 and reformed as a duo, managing to keep their original accounts.[1]

In early 2019, the group rebranded to "YULiONi" for unspecified reasons. The duo's first post to include the new name was uploaded on February 2, of the same year.[2]

In April, the duo was joined by two other former Baby Boo members: Hajin and Roori (Jelly).[3]

As of 2020, Dayul is now a member of the upcoming girl group Crescendo, leaving YULiONi's status as unknown. 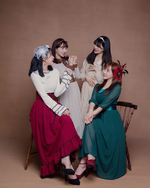 Retrieved from "https://kpop.fandom.com/wiki/YULiONi?oldid=185398"
Community content is available under CC-BY-SA unless otherwise noted.