Xdinary Heroes (엑스디너리 히어로즈) is a six-member boy band under JYP Entertainment's sub-label, Studio J. They made their debut on December 6, 2021 with the digital single "Happy Death Day".

Their name is an abbreviation of "Extra Ordinary Heroes", meaning "anyone can become a hero".[1]

On July 13, 2021, JYP Entertainment applied for a trademark right for "Xdinary Heroes".[2]

On October 24, JYP Entertainment posted a teaser titled "Coming up Next" hinting at a new group's debut. On November 1, they released another teaser, "Heroes are Coming".[3]

On November 8, the company released a new teaser revealing the group's name, Xdinary Heroes, and opened the group's SNS accounts.[4]

On November 29, Xdinary Heroes announced that they would debut on December 6 with their first digital single, "Happy Death Day". The first set of teaser photos, for member Jooyeon, were also released at the same time.[18] The single was then released on December 6. 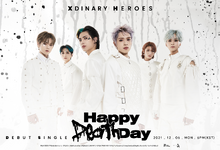