Wonder Girls (원더걸스) was a girl group under JYP Entertainment. They held their debut showcase on February 10, 2007 and officially debuted in February 13, 2007 with the mini album The Wonder Begins.

JYP announced in June 2015 that the group would comeback as a four-member band after a two-year hiatus. Sunmi, who had left the group in 2010 to pursue academics and a solo career, returned. On July 20, 2015, JYP officially announced the departures of Sunye and Sohee.

The group held their debut stage on MBC's Show! Music Core on February 10, 2007 by performing the song "Irony" from their first single "The Wonder Begins". In July 2007, Hyuna left the group due to health concerns. She was replaced by Yubin, a trainee from Good Entertainment, who then debuted with the group with the release of their first full-length album The Wonder Years.

Their second single "So Hot" was released on June 3, 2008 and became a hit on the charts. Shortly after, their released their first mini album, The Wonder Years - Trilogy, on September 23, 2008. The album's title track "Nobody" became another hit for the group, topping charts and winning multiple awards including "Song of the Year", "Best Music Video"", and "Best Female Group at the Mnet KM Music Festival Awards.

The group held their first solo tour in February 2009 and later joined the Jonas Brothers in North America as a supporting act for the Jonas Brothers World Tour 2009. The song "Nobody" was released as their debut English single. The song entered the Billboard Hot 100 at number 76, becoming the first K-pop group to appear on the chart.

In January 2010, it was announced that Sunmi would be postponing her musical career to pursue academics and was replaced by trainee Hyerim who was originally set to debut with miss A. Their third single "2 Different Tears" was released on May 16, 2010, and a day earlier in the United States as their first English EP.

JYP teased the group's comeback in October 2011 and their second full-length album Wonder World was released on November 7 with "Be My Baby" as the title track.

The group announced they will release a made-for-TV movie title The Wonder Girls in 2012. The single "The DJ Is Mine" which features girl group School Gyrls was released on January 12 as a tie-in. The movie premiered on TeenNick on February 2.

In July 2015, JYP announced the group would return as a band with Sunmi re-joining the group after a stint as a soloist. They released their third full-length album Reboot on August 3, 2015. On July 5, 2016, they released their fourth single "Why So Lonely" which became another commercial success.

On January 26, 2017, JYP announced the Wonder Girls were disbanding after Sunmi and Yeeun had decided not to renew their contracts with the agency. The group released their final single "Draw Me" on February 10 which coincided with their 10th anniversary as a group. 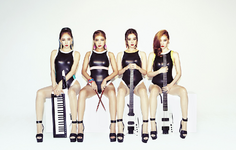 Retrieved from "https://kpop.fandom.com/wiki/Wonder_Girls?oldid=158706"
Community content is available under CC-BY-SA unless otherwise noted.