W.A.F.F.L.E
Wassup (와썹; also stylized as WA$$UP) was a girl group formed by Sony Music Entertainment Korea and Mafia Records.[1] They debuted on August 8, 2013 with their self-titled single "Wassup". They disbanded on February 10, 2019 following terminations of their contracts.[2] 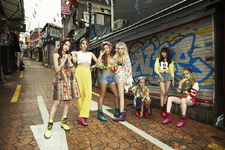