The song "Wake Me Up" was released on digital platforms on April 25, 2018, as well as its music video.

A special TWICE pop-up store selling group merchandise was held at HMV & Books Shinsabashi in Osaka, from April 27 to June 3. From May 15, an exclusive "Wake Me Up" tote bag was also sold there.[1] 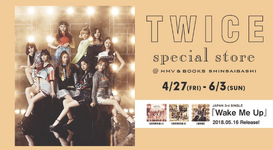 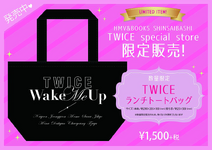 A single release event with the TWICE members was organized on June 9 and 10, 2018 at Yomiuri Land amusement park near Tokyo. The event offered the possibility to buy some exclusive "Wake Me Up" goods. 12 exclusive objects were available along with the group's light stick and light ring.

The goods were also available for sale online on Warner Music Direct website, from June 11 to 24. An additional item was added for the occasion. 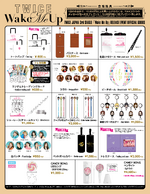 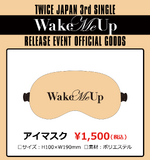 Retrieved from "https://kpop.fandom.com/wiki/Wake_Me_Up_(TWICE)?oldid=212475"
Community content is available under CC-BY-SA unless otherwise noted.