WINGS (윙스) was a female duo under Sony Music Entertainment Korea and Dal&Byul Music. They debuted on March 12, 2014 with the single "Hair Short".

They are presumably disbanded due to inactivity since 2017, after auditioning for the idol rebooting show The Unit and Yeseul making her solo debut under 8D Creative in 2019. 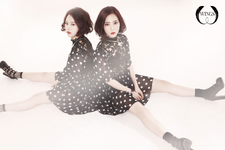 Retrieved from "https://kpop.fandom.com/wiki/WINGS_(duo)?oldid=196995"
Community content is available under CC-BY-SA unless otherwise noted.