TraxX (트랙스; formerly known as The TRAX and TRAX) is an EDM duo. Originally a rock band under SM Entertainment, they debuted on July 20, 2004 with the single "Paradox".

On March 26, 2018, SM announced that the group would be changing their name to TraxX and would become an EDM group with DJ and producer Ginjo joining as a new member.[1]

On April 30, 2019, SM announced their departure from the agency following the contract expirations for members Jay and Jungmo.[2] 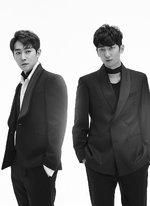