The Story of Light

SM Entertainment
The Story of Light is the sixth full-length album by SHINee. The album celebrates the group's 10th anniversary and was released in three parts, each containing 5 new songs:[1]

It is their first Korean release since 2016 with 1 and 1 and as a four-member group following the death of member Jonghyun in December 2017. The group also held a fan meeting "SHINee Debut 10th Anniversary ☆ SHINee Day" on May 27 as part of their anniversary celebrations.[2] 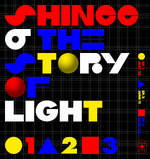 Retrieved from "https://kpop.fandom.com/wiki/The_Story_of_Light?oldid=83619"
Community content is available under CC-BY-SA unless otherwise noted.