The Ruby is the sixth mini album by APRIL. It was released on October 16, 2018 with "Oh! My Mistake" serving as album's title track.

On October 4, 2018 the name of APRIL's sixth mini album was revealed to be The Ruby with a teaser image, that after being uploaded to the group's official Twitter and Instagram was quickly removed after Dove Cameron requested the company to do so,[1][2] later the same day the comebacks schedule was revealed.

From October 10 to 15 the album was available to pre-order.

On October 10, album's tracklist was revealed, together with the album preview, it was also announced that "Oh! My Mistake" is the EP's title track.[5]

On October 11, the highlight medley was uploaded to APRIL's official YouTube channel.

On October 13, the first teaser for "Oh! My Mistake" music video was released, the second teaser was posted on the following day.

The music video for "Oh! My Mistake" was released on October 16. 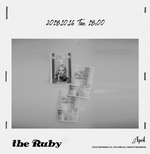 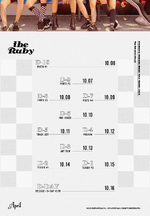 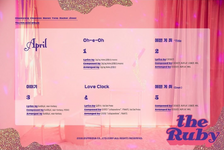 Retrieved from "https://kpop.fandom.com/wiki/The_Ruby?oldid=100904"
Community content is available under CC-BY-SA unless otherwise noted.