Twicetagram
Merry & Happy
What is Love?

90,000
TWICE 2nd Tour: TWICELAND Zone 2: Fantasy Park is the second Asia tour held by TWICE. The first show was held on May 18, 2018 at Jamsil Indoor Stadium in Seoul, South Korea.

On July 27, 2018, JYP Entertainment announced the Kuala Lumpur concert, set for the next day, had to be cancelled due to safety issues at the show's venue.[1]

On November 13, 2018, the upcoming release in theaters of the movie Twiceland was announced on the group's social networks.

The movie follows the group on their tour and its stops in Singapore, Bangkok and Jakarta; and includes offstage footage and interviews of the members. It was filmed using the ScreenX technology, allowing viewers to feel as being part of the concert.

On December 7, 2018, the movie was released for ten days at 50 ScreenX cinemas in South Korea, but also at 14 locations in the USA and 3 locations in Canada. 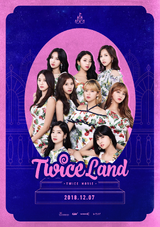 Retrieved from "https://kpop.fandom.com/wiki/TWICE_2nd_Tour:_TWICELAND_Zone_2:_Fantasy_Park?oldid=261297"
Community content is available under CC-BY-SA unless otherwise noted.