Warner Music Japan
#TWICE2 is the second Japanese best album by TWICE. It was released on March 6, 2019 and consists a total of ten songs including Japanese versions of their titles tracks from 2017 to 2018.

The Japanese version of "Likey" was released digitally on January 10, 2019, along with its music video.

The Japanese version of "What is Love?" was released digitally on February 8, 2019, along with its music video.

DVD (Type B only)

An album release event with the TWICE members was organized on March 24, 2019 at Intex Osaka convention center. The event offered the possibility to buy some exclusive #TWICE2 goods. 8 exclusive objects were available along with the group's light stick.[2]

The goods were also available for sale online on 7net.com website or at the Once Japan official shop, from April 7 to 21. An additional item was added for the occasion.[3]

To celebrate the release of "Happy Happy" and "Breakthrough", the remaining #TWICE2 items were later sold at a selection of Tower Records store in Japan, from June 28, 2018 for 2 weeks.[4] 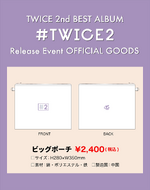 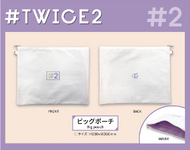 Retrieved from "https://kpop.fandom.com/wiki/TWICE2?oldid=212482"
Community content is available under CC-BY-SA unless otherwise noted.