Sojin (소진) is a South Korean singer under LUK Factory. She is a member of the girl group Hashtag.

After being revealed as the third member of Hashtag on September 20, 2017 she officially debuted in the group on October 11, with the group's first mini album The Girl Next Door. 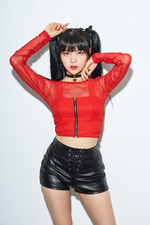 Retrieved from "https://kpop.fandom.com/wiki/Sojin_(Hashtag)?oldid=145421"
Community content is available under CC-BY-SA unless otherwise noted.