May 5, 2015 – July 7, 2015
SIXTEEN was a reality survival show created by JYP Entertainment and Mnet. It determined JYP's future girl group TWICE, and it put sixteen JYP trainees against one another. 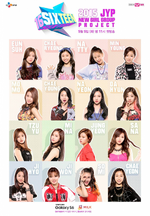 Retrieved from "https://kpop.fandom.com/wiki/SIXTEEN_(show)?oldid=285142"
Community content is available under CC-BY-SA unless otherwise noted.