Linos
SHINVI (신비) was a three-member girl group under SM Entertainment's sister label Cid.K Entertainment. They debuted in April 2002 with their first and only studio album 15 to 30. They disbanded sometime in 2003.

Their group name means "to fly towards God" in Korean.

The group presumably disbanded sometime in 2003 due to lack of official activities.

Following the group's disbandment, Sujin remained signed to SM Entertainment until her departure in 2008. Meanwhile, Sangeun transferred agencies and debuted in 2007 under the stage name 'Ne;MO'. Yoo Na retired from celebrity life and went onto study in university and later became a lawyer. 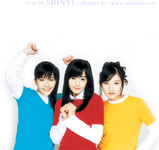