Kakao M
Red Moon is the seventh mini album by MAMAMOO. It was released on July 16, 2018 with "Egotistic" serving as the album's title track. The song "Rainy Season" was pre-released on July 1, 2018. It also include the song "Selfish" from Moon Byul's solo debut digital single "Selfish".

The summer-themed record is the second part of their "Four Seasons Four Colors" project. 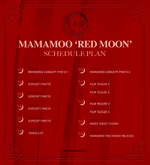 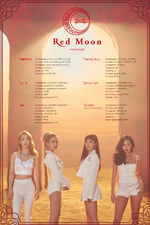 Retrieved from "https://kpop.fandom.com/wiki/Red_Moon_(MAMAMOO)?oldid=162673"
Community content is available under CC-BY-SA unless otherwise noted.