Red Light is the third full-length album by f(x). It was released on July 7, 2014 with "Red Light" serving as the album's title track. The track "Milk" was also used during promotions.

This was the group's last album with member Sulli.

The album's concept is darker than the ones the group has shown before. The members expressed their happiness of being able to show another side of them in various interviews.[1]

The title track "Red Light" is described on Korean digital platforms as a "blast of urban rhythm bit, reversal in electrohouse genre". The lyrics talk about capturing great moments, stop and reconsider what is important in life. It is a also message, using "red light" to symbolize the warning.[2] SM Entertainment's Director of production Lee Sung Soo later clarified the meaning behind the song as being a criticism of the Sewol ferry's incident that happened earlier in 2014 in South Korea.[3]

The album was physically released in two versions: a type A version called "Sleepy Cats" with 2 different covers (randomly printed either on the front side or the back of the case) and a type B version called "Wild Cats".

Two limited A and B editions were later released in Taiwan, including similar content and a bonus translation of the lyrics in Chinese.

In the middle of the "Red Light" promotions, Sulli decided to took a hiatus from the entertainment industry. SM Entertainment released a statement on July 24, stating that she has been "mentally and physically exhausted from the continuous, malicious comments and false rumors" that had been spread about her.[4] The promotions for the title ended after the statement, and the remaining members shifted their activities to focus on solo ventures.

Sulli would eventually withdraw from the group on August 7, 2015, making Red Light her final contribution with the group.[5]

The album was a commercial success, selling 86,143 copies in 2014 in South Korea, making it the 19 biggest-selling album of the year in the country.[6]

On September 2, 2014, exclusive Red Light merchandise was made available for sale at SMTOWN Stardium stores in Seoul, and at the Everysing store of Incheon Airport. 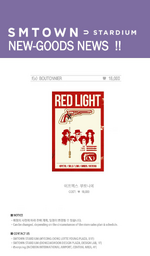 Retrieved from "https://kpop.fandom.com/wiki/Red_Light?oldid=236033"
Community content is available under CC-BY-SA unless otherwise noted.