June 15 – August 31, 2018
Produce 48 (프로듀스 48) was a 2018 girl group survival show on Mnet. A sequel to Produce 101 and Produce 101 Season 2, it is a large-scale project in which the public "produces" a unit girl group by choosing members from a pool of 96 participants. Unlike the previous two seasons, the show invited trainees from both Korea and Japan to complete including members from the J-pop group AKB48.

Rumors of a third season began on November 8, 2017 after news outlet OSEN published an exclusive report of the show's return, also indicating that they would be collaborating with Japanese girl group AKB48. Mnet denied the report stating the contents of the article were groundless.[1]

Contestants moved into dorms specially for the show on April 11 and spent a week there training and recording their audition performances.[3]

The show was originally intended to have 48 Korean trainees and 48 Japanese trainees, however, the final contestant lineup consisted of 57 Korean Trainees and 39 Japanese trainees. This was because some Japanese idols withdrew from the program due to their work schedules and hence could not compete in the show.[citation needed] 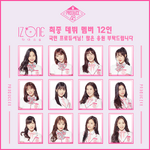