J.Y. Park
Page Two is the second mini album by TWICE. It was released on April 25, 2016 with "Cheer Up" serving as the album's title track.

The physical release comes in two versions: Pink and Mint. A limited edition version featuring an album sleeve designed by member Chaeyoung was limited to the first 30,000 copies.

A limited-edition monograph, detailing some of the album production process, was released on September 30, 2016. It contains a 150-pages photobook and a 45-minutes DVD, both featuring behind-the-scenes pictures and footage from the album photoshoot and the "Cheer Up" music video shooting; and 9 member photocards. 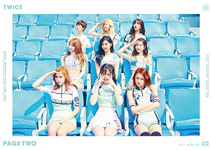 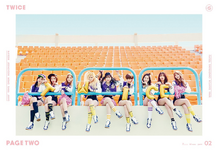 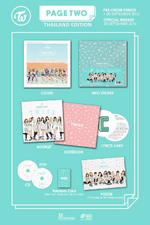 Retrieved from "https://kpop.fandom.com/wiki/Page_Two?oldid=189719"
Community content is available under CC-BY-SA unless otherwise noted.