Dreamus
P Nation (피네이션) is South Korean record label and entertainment agency. It was founded in January 24, 2019 by singer and producer PSY.

On May 14, 2018, it was reported that PSY would be leaving his agency, YG Entertainment, in order to start his own.[1]

On January 23, 2019, it was announced via Instagram that the label would be known as P Nation.[2] On the following day, the first signed artist was announced to be Jessi, former Lucky J member and soloist.[3] Two days later, it was announced that partners and former Triple H members, HyunA and E'Dawn, were also signed on the agency.[4] On July 17, 2019, the agency recruited another popular name in the music industry, the singer-songwriter and producer Crush. He left the agency Amoeba Culture after the end of his six years contract.[5]

On September 16, 2020, P Nation revealed that Heize had signed an exclusive contract with the agency.[6] 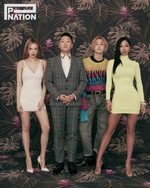 Retrieved from "https://kpop.fandom.com/wiki/P_Nation?oldid=228707"
Community content is available under CC-BY-SA unless otherwise noted.