PPL (피피엘) was a six-member girl group formed by Parksal Entertainment in 2015. They made their debut on October 30, 2015 with their single "Rush". Their name stands for 'Perfect Performance Lady'. With their third single, PPL gained notable attention due to their participation in MIXNINE and their single "Shoot U".

In early 2018, Parksal announced that PPL would undergo a massive line-up change, resurfacing that spring with 4 new members, with only Da Hee and Ah Hee appearing in social media updates and live performances, with Ah Hee also active as DJ Fatal. The new members were never formally introduced and PPL later ceased activities around the fall of 2018.

In March 2020, Parksal re-purposed the PPL Facebook page for a shop, unofficially confirming them as disbanded. 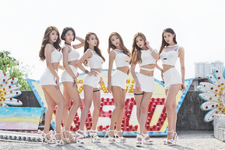 Retrieved from "https://kpop.fandom.com/wiki/PPL?oldid=170007"
Community content is available under CC-BY-SA unless otherwise noted.