PEACE (피쓰) was a four-member girl group under KRAZY Entertainment. They debuted on April 12, 2019 with the digital single "Find Your Peace".

On May 15, KRAZY Entertainment published a photo on their official Instagram during the filming for a music video. A few days later, the agency published individual photos for each of the three members, who were revealed to be former members of BULLDOK.

On May 18, KRAZY officially revealed that their new girl group will be called PEACE.[1]

In December 2018, a fourth member named Yu Rim was introduced.

PEACE released their pre-debut single "Yallacha" on April 12th, 2019, ahead of their upcoming debut projected for the second half of 2019.

PEACE disbanded during the second half of 2019 following the closure of KRAZY Entertainment alongside labelmate OAH!SIS. 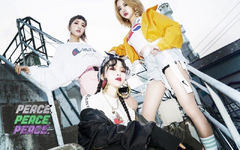 Retrieved from "https://kpop.fandom.com/wiki/PEACE?oldid=189930"
Community content is available under CC-BY-SA unless otherwise noted.