Warner Music Japan
"One More Time" is the first Japanese single by TWICE. It was released on October 18, 2017.

Two single release events with the TWICE members were organized:

Both events offered the possibility to buy some exclusive "One More Time" goods. 11 exclusive objects were available along with the group's light stick.

The goods were also available for sale online, thanks to a partnership with retailer Famima, from October 29 to November 12. 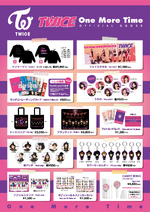 Retrieved from "https://kpop.fandom.com/wiki/One_More_Time_(TWICE)?oldid=212470"
Community content is available under CC-BY-SA unless otherwise noted.