MINX (밍스) was a five-member girl group under Happyface Entertainment. They debuted on September 18, 2014 with the digital single "Why Did You Come To My Home?".

The group officially disbanded on November 29, 2016 after Happyface Entertainment announced they would re-debut under the name Dreamcatcher with the addition of two new members.[1]

On August 9, 2014, Happyface Entertainment teased the debut of a new five-member girl group at Oak Valley Summertime Festival.[2] On September 15, Happyface officially announced the new group, revealing its debuting name to be MINX.[3]

MINX officially debuted on September 18 with their first single and only digital single "Why Did You Come To My Home?".

On July 15, 2015, the group made their first comeback with their only mini album, titled Love Shake.

Over a year since the group's last release, on November 29, 2016, Happyface Entertainment announced that the group would re-debut under the name Dreamcatcher with the five original members and two new members.[1] These new members, Handong and Gahyeon, were revealed on December 1 and December 5 respectively.[4][5] 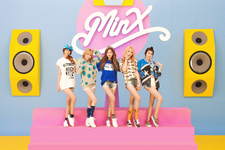 "Why Did You Come To My Home?"