MATILDA (마틸다) was a girl group under Box Media. They debuted on March 18, 2016 with the single "Macarena".

They reportedly disbanded in September 2019 following the members' contract expiration with the agency.[1]

2018–present: "Between Fall and Winter" and disbandment

On November 19, 2018, MATILDA released their fourth single "Between Fall and Winter".

On September 6, 2019, Semmi and Dan-A announced their departures from the group after ending their contracts with Box Media.[2] The following day, Saebyeol also announced through her Instagram that she concluded her contract with the agency as well.[3] On September 11, 2019, multiple sources stated the group disbanded after the members' exclusive contracts, including Haena, had expired.[1] 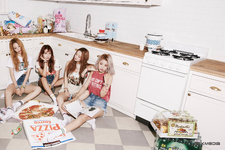 Retrieved from "https://kpop.fandom.com/wiki/MATILDA?oldid=144792"
Community content is available under CC-BY-SA unless otherwise noted.