MARMELLO (마르멜로) was a female pop rock band under Rolling Culture One. They debuted on May 24, 2017 with their first single "Puppet".

On April 26, 2018, it was announced on their Facebook page that Daeun left the group to focus on her studies, her last performance with the group was on April 27, 2018.

On September 2, 2019, the members each separately posted stating that the group had disbanded.[1] 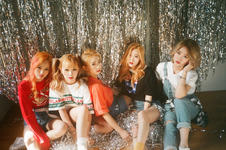