IRIVER
Love Yourself: Tear (Love Yourself 轉 'Tear') is the third Korean full-length album by BTS. It was released on May 18, 2018 with "Fake Love" serving as the album’s title track.[1]

The album was first teased on April 6 with the release of the teaser video titled "Euphoria : Theme of LOVE YOURSELF 起 Wonder". Big Hit later confirmed on the 17th that the group would be releasing their third Korean album on May 18.[2][3]

On May 7, a comeback trailer titled "Love Yourself 轉 ‘Singularity'" was released. The track, which is an R&B song based on the Neo-Soul genre, is performed by member V and will be the intro track for the album.[4]

Track 8, "Airplane pt.2", is a follow-up track to the song "Airplane" from J-Hope's mixtape Hope World, and features lyrics written by American songwriter Ali Tamposi - known for her work with Beyoncé, Christina Aguilera, and One Direction.[1]

The album's 7th track, "Magic Shop", was co-written and produced by BTS member Jungkook and marks his debut as a producer.[1]

An initial teaser trailer for the title track, "Fake Love", was released on YouTube on May 14, introducing the idea of the psychodramatic technique known as “magic shop,” which the video describes as "exchanging fear for a positive attitude." The first trailer also featured an acapella clip of the track's chorus.[5] A second teaser trailer was released on May 16, revealing some of the track's official choreography.[6]

Prior to the album's release, a comeback preview show was broadcast live on the Naver V Live app, featuring a talk portion discussing the meaning behind the album, games, and behind the scenes footage presented by the members.[7]

The group is set to perform the album's title track, "Fake Love," at the Billboard Music Awards on May 20, where they are also nominated for the Top Social Artist Award. This marks the first performance by a K-pop artist at the Billboard awards.[8]

The group is also scheduled to perform "Fake Love" on the Ellen Show on May 25.[9]

The album was released worldwide on all streaming and download services on May 18, 2018.[1]

The music video for the title track, "Fake Love", was released simultaneously on the Big Hit Entertainment official YouTube channel. The music video reached 1 million likes on the video service within 39 minutes, breaking the previous record of 1 hour and 29 minutes set by the video for "Intro: Singularity" just two weeks previously.[10] Both tracks broke the record for the fastest K-pop video and the fastest music video of any genre to reach the milestone.

E-commerce and shipping company Amazon made a shipping error with the Love Yourself: Tear pre-ordered albums, causing some fans to receive their physical copies of the album prior to the official release date on May 18. Copies of the album's tracks, photocards and photobook pages quickly surfaced online following the error. Big Hit Entertainment was made aware of the shipping error late Thursday, May 17, and responded with a public statement confirming their awareness and their intention to address the issue of leaked content online through potential legal action.[11] 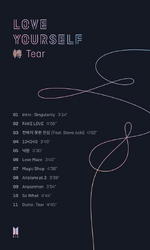