Kiss&Cry (키스&크라이) was a girl group under Winning Insight Media. They debuted on January 24, 2014 with the digital single "Domino Game".

Before becoming members of Kiss&Cry, Bohye was a member of the group Bella, that disbanded in 2011 and Dia was a soloist.

2014: Debut with "Domino Game", "Revenge", Haena's departure, hiatus and disbandment of the group

The group officially debuted with the digital single "Domino Game". They made their first and last comeback on May 7, with "Revenge". On September 5, the company announced that the member Haena left the group after her contract expired and she didn't want to renew it, after the departure the group was put on hiatus. It's not known when the group officially disbanded.[1][2]

Bohye re-debuted in DESTINY. Haena re-debuted as member of the group MATILDA in 2016. Dia once again became a soloist. Soyumi debuted solo in 2015 with the digital single "Shake Me Up". 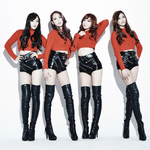 Retrieved from "https://kpop.fandom.com/wiki/Kiss%26Cry?oldid=151137"
Community content is available under CC-BY-SA unless otherwise noted.