For the member of CoCo, see Kim Suhyeon.

Kim Su Hyun (김수현) is a South Korean actress and trainee under MYSTIC Story. She is a part of the trainee group MYSTIC Rookies.

Kim Su Hyun originally appeared on the survival show Produce 101. She was eliminated in episode 5 after ranking 69th place.[1]

In October 2017, she became a contestant on the survival show MIXNINE. She made it until the final episode, but was eliminated when the boys' team won against the girls' team, and hence ultimately did not get to debut.[2]

That same year, she made her acting debut in the drama Girls' Generation 1979. 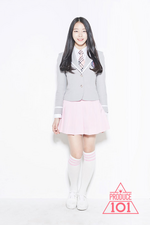 Retrieved from "https://kpop.fandom.com/wiki/Kim_Su_Hyun?oldid=166769"
Community content is available under CC-BY-SA unless otherwise noted.