Somi (소미) is a South Korean singer. She is a former member of BaBa.

Somi (Hyewon) joined BaBa shortly after the release of the group's second digital single "Catch Me", after the departure of Somi (Bimby). In later months she along with original BaBa members Hyoah and Dayul decided to leave the group.

She rejoined the group after their promotions for "Funky Music" ended. She made her official debut in BaBa on July 3, 2018, with their fourth digital single "Oh! My God!", Somi left the group sometime after the single's release. 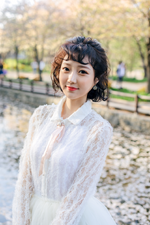 Retrieved from "https://kpop.fandom.com/wiki/Kim_Hye-won?oldid=117823"
Community content is available under CC-BY-SA unless otherwise noted.