YG PLUS (Korea)
Interscope Records (International)
Kill This Love is the second Korean mini album by BLACKPINK. It was released on April 5, 2019 with "Kill This Love" serving as the album's title track and "Don't Know What to Do" as a sub-title track.[1]

On digital platforms outside of Asia, the title track was initially released on the 4th as a standalone single. The entire album was subsequently released worldwide on the 5th at 12am local time. 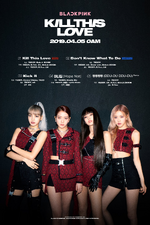 Retrieved from "https://kpop.fandom.com/wiki/Kill_This_Love?oldid=131555"
Community content is available under CC-BY-SA unless otherwise noted.