On July 6, 2018, it was announced that Karam would release a pre-debut single with the sub-unit Geupsik-Dan of the upcoming boy group D-CRUNCH on July 10 with the digital single "Geupsik-Dan".[1]

On October 24, she was announced as one of the six members in All-S Company's newest girl group ALLS-GIRL.

On February 28, 2019, due to reasons that have not been announced, Karam and Yu Ha departed the group and agency.[citation needed] 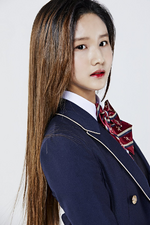 Retrieved from "https://kpop.fandom.com/wiki/Karam_(ALLS-GIRL)?oldid=199562"
Community content is available under CC-BY-SA unless otherwise noted.