For other people known as Lea, see Rea.

LEAMON
Jung Lea (정리아), or simply Lea, is a South Korean-American singer, actress, YouTuber and model under Model Directors. She is a former member of the girl group VIVA.

In 2017, Lea became a member and the maknae of the girl group VIVA under Shine E&M. The girl group debuted on October 13, 2017 with the release of their self-titled single "VIVA". The group never released another further music presumably disbanded sometime after their last March 2019 and each member having departed the agency.[citation needed]

On April 14, 2020, Lea became a YouTuber after opening her own channel. She is also currently active as a model for Model Directors in Seoul, South Korea.[1]

Lea is the eldest child of Chinese-based Brazilian-American singer and TV personality, Nabil David Huening and his ex-wife Jung Yeonju. Her younger brother, Kai, also debuted as an idol in 2019 in the boy group TXT,[2] while her younger sister, Bahiyyih, is currently a contestant on survival show Girls Planet 999.[3] 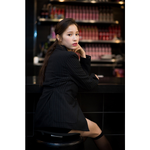