Jung Dakyung (정다경) is a South Korean solo trot singer-songwriter and composer under SSo Factory. She made her debut in October 20, 2017 with digital single "I'd Love To".

In February 2019, she joined the competitive survival reality show Miss Trot and won, earning her a place in the trot-pop girl group Venus that debuted on August 6, 2019.

Sometime in 2016, Jung Dakyung became a trainee under the South Korean trot singer Nam Jin. Around this time, she took on the stage name Soyeon (소연) and opened YouTube and Africa TV channels named 'Berry Soyeon TV' where she showcased her singing and occasionally uploaded mukbang videos and invited guests. At the end of the year, she performed a live dance to Nam Jin's "Resume" at a year-end concert.[citation needed]

By March 2017, Berry Soyeon TV no longer uploaded any new videos, presumably to prepare for an upcoming debut.[citation needed]

On October 20, 2017, she officially made her debut under the stage name Jung Dakyung (정다경) and released the trot digital single "I'd Love To". The single was entirely written and produced by her.

In February 2019, she joined the competitive survival reality show Miss Trot and won, earning her a place in the trot-pop girl group Venus. As part of her prize for winning, she got to release a special digital single track named "Love Light" and promoted on THE SHOW on June 18, 2019.

Shortly after, Venus made their official debut on August 6, 2019 with the trot digital single "Turn Signal".

Jung Dakyung attended Maewon Middle School and later went to Kaywon High School. Following her graduation, she went onto further studying at Hanyang University where she was in the Department of Dance. She then continued onto graduate studies at Hanyang University and graduated within the School of Performing Arts. 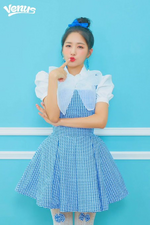 Retrieved from "https://kpop.fandom.com/wiki/Jung_Dakyung?oldid=132801"
Community content is available under CC-BY-SA unless otherwise noted.