Trainee A
JJ (Korean: 제이제이; Japanese: ジェージェー) is a Japanese-American trainee under BigHit Music. He is a member of the upcoming boy group Trainee A and a former member of the Japanese boy group AMEZARI -RED STARS-.

On February 3, 2020 he debuted as part of the group AMEZARI -RED STARS- with the single "Impulse to the higher".[1] He left the group sometime during the end of the same year.

On August 22, 2021, the "About" section from the group's YouTube's channel was updated, revealing JJ as a hidden member. 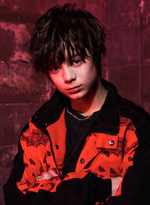