YG Plus
I Decide (stylized as i DECIDE.) is the third mini album by iKON. It was released on February 6, 2020 with "Dive" serving as the album's title track. "Flower" was also promoted on music shows.

The physical release comes in two versions: Red and Green.

On January 21, 2020, a concept teaser video was released for their third mini album titled I Decide.[1] On January 29, YG Entertainment released a statement explaining that the songs B.I worked on, prior to his departure from the group in mid-2019, will be included in the album. However the tracks will be adjusted to exclude B.I's rap parts due to not being completely written by himself and that a new song, co-composed by one of the members, will be added.[2] 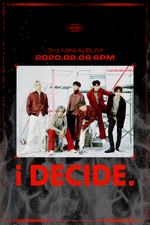 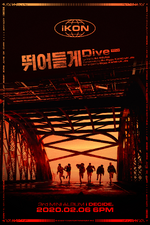 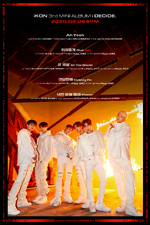 Retrieved from "https://kpop.fandom.com/wiki/I_Decide?oldid=165864"
Community content is available under CC-BY-SA unless otherwise noted.