INX (인엑스) was a five-member boy group under NA Entertainment. They debuted on August 2, 2016 with the single "Alright".

On November 30, 2017, Jinam announced through a Instagram Live that the group had disbanded.

On June 22, 2018, it was revealed the group won a lawsuit against their agency to nullify their exclusive contract due to poor working conditions and lack of support.[1] 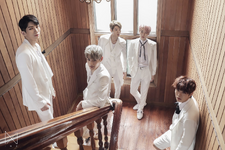 Retrieved from "https://kpop.fandom.com/wiki/INX?oldid=212235"
Community content is available under CC-BY-SA unless otherwise noted.