YULiONi
Baby Boo
SOME
Leader'S
Leader'S T
Hajin (하진) is a South Korean singer. She is a member of the upcoming girl group YULiONi. She is also a former member of Baby Boo, Leader'S, their sub-unit Leader'S T and a pre-debut girl group SOME.

Yesol originally debuted as the leader of the eight-member girl group Leader'S, with the group's first digital single "Please" on March 22, 2011.[1]

In October 2011, the group's company announced that Leader'S has been reorganized into a twenty-four-member girl group with three sub units, Yesol became the leader of the Leader'S T unit.[2]

It's presumed that she left the group sometime in 2012; at the beginning of the group's first hiatus.

In April of 2019, Dayul teased two new members for the group on her Instagram account.[4] Not long after, the members were revealed to be Hajin and Roori.[5] 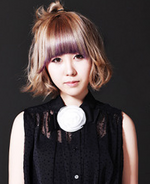 Retrieved from "https://kpop.fandom.com/wiki/Hajin?oldid=214211"
Community content is available under CC-BY-SA unless otherwise noted.