0wave
TREASURE 13
MAGNUM
YG Treasure Box
Ha Yoonbin (하윤빈), also known as Ben, is a South Korean rapper. He is a member of the one crew 0wave and was a pre-debut member of the boy group TREASURE 13 and its unit MAGNUM.

Yoobin was first introduced as a trainee in the survival show YG Treasure Box, which aired from November 16, 2018 to January 18, 2019. He made to the Top 11 in the finale but was not chosen as a member of YGE's upcoming boy group TREASURE.[1]

On January 29, 2019, Yang Hyun Suk announced that he would be debuting a second boy group from the show.[2] Yoobin was announced as the group's first member on January 31.[3] It was later revealed that both groups would debut together as TREASURE 13 and that following their debut, the members of the respective units (TREASURE and MAGNUM) would promote separately.[4]

On January 6, 2020, it was revealed that Yoonbin had departed from the group on December 31, 2019 after cancelling his contract with the agency due to differences in musical direction.[5]

However, as of present, the songs have been deleted from his SoundCloud account. 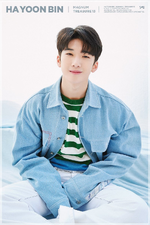