HONEYST (허니스트) was a four-member boy band under FNC Entertainment. They were part of FNC's trainee system "NEOZ School" and took part in Mnet's survival show d.o.b (Dance or Band) as the NEOZ Band team but lost to the dance team which debuted as SF9.

Their name is a combination of "Honey" and "Artist". 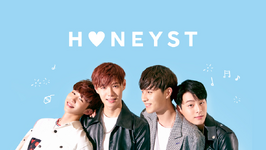 Retrieved from "https://kpop.fandom.com/wiki/HONEYST?oldid=162991"
Community content is available under CC-BY-SA unless otherwise noted.