GOT the beat (갓 더 비트) is a seven-member female unit under SM Entertainment. They made their debut on January 3, 2022 with the digital single "Step Back".[1] They are the first unit under SM's Girls On Top project.

On December 27, 2021, SM Entertainment opened the social networks for the project, at the same time the unit's first photo, its members and debut date on January 3, 2022 were revealed. It was also announced that the unit would be doing a special stage at SMTOWN Live 2022 : SMCU Express@Kwangya on January 1, 2022.[2] Later that same day, SM explained that GOT the beat is the first unit of the agency's newest project, Girls On Top, in which female artists under the SM will show different unit combinations by theme. The 'GOT the beat' unit is based on intense dance songs and performances.[3] On December 28, 2021, it was announced that the unit would be debuting with the digital single "Step Back".[4]

On January 3, "Step Back" was released.

On January 30, the unit won their first music show win with "Step Back" on SBS's Inkigayo.[5] 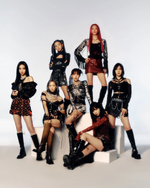