GIRLS GIRLS (여자여자) was a girl group under H Brothers Entertainment. Originally began as five, they debuted on December 9, 2015, with the single "Strong Girls".

The group is believed to have disbanded after Rina, the only active GIRLS GIRLS member, posted on her Instagram account that she was starting anew.[1] Bori and Aryoung were already unfollowed by the group account in 2018, and Bori deleted all of her old posts from her Instagram account.[2]

The group also wasn't as an artist on H Brothers Entertainment's new homepage launched earlier in 2019, which has since been turned into Miso's solo homepage.[3] 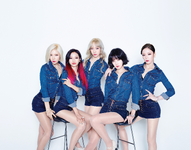 Retrieved from "https://kpop.fandom.com/wiki/GIRLS_GIRLS?oldid=160845"
Community content is available under CC-BY-SA unless otherwise noted.