"Fireflies" is a special English digital single by NCT Dream. It was released on July 15, 2019 as a collaboration with the World Scout Foundation.

"Fireflies" is a special track in English that is being released after the group was appointed as the Global Ambassador of the World Scout Foundation. All profits made from the track will be used to support scouting activities in low income countries.[1]

The song was performed at opening ceremony of the 24th World Scout Jamboree on July 23, 2019 in Summit Bechtel Reserve, West Virginia.[2] 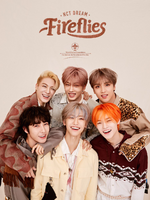 Retrieved from "https://kpop.fandom.com/wiki/Fireflies?oldid=148771"
Community content is available under CC-BY-SA unless otherwise noted.