Bang Si Hyuk (executive producer), 13
Fearless (stylized in all-caps) is the debut mini album by LE SSERAFIM. It was released on May 2, 2022 with "Fearless" serving as the album's title track. "Blue Flame" was also promoted on music shows.

This was the only release to feature Garam after temporarily taking a hiatus from all activities following the album's release, before ultimately leaving the group and their agency following contract termination on July 20, 2022, due to school bullying accusations.[1]

On March 25, 2022, Source Music started a 72-hour countdown through their official website with the page reading "IM FEARLESS" which would later revealed to be an anagram for the group's name, LE SSERAFIM.[3][4] Later that same day, it was reported that the group would have six members, including Sakura, Chaewon, Yunjin, two trainees from Source Music and a Dutch member personally recruited by the CEO of Source Music.[5]

On March 29, 2022, a project called 'The First Moment of LE SSERAFIM' was revealed through Weverse, which would start with the reveal of the group's first member, Sakura on April 4, 2022.[6] On April 4, 2022, the project 'The First Moment of LE SSERAFIM' was started, in which voice messages, signature and exclusive photos of the members were revealed, as well as snippets of the group's debut song through their official website.[7][8]

The title track "Fearless", has been described as a funk-based alternative pop genre song that contains the message of moving forward without fear and without being influenced by the world's gaze.[11]

The album's first track "The World Is My Oyster" was described as a song that harmonizes with a strong rhythm reminiscent of a fashion show catwalk and a psychedelic mood. Members Kim Chaewon and Huh Yunjin participated in composing the lyrics for "Blue Flame", a disco-punk-style song that creates a mysterious atmosphere with a sophisticated melody. "The Great Mermaid" is a song that reinterprets the fairy tale "The Little Mermaid" from the perspective of LE SSERAFIM. "Sour Grapes", which was themed around the story of Esop's fable "The Fox and the Grapes", sings the psychology of pure curiosity about love and the selfish side of valuing yourself more.[11]

On March 30, 2022, it was reported that HYBE founder Bang Si Hyuk ("Hitman Bang") would be in charge of LE SSERAFIM's debut album, being credited as the 'Executive Producer'.[12]

On April 14, 2022, the album's promotion time table was revealed.[13] On April 18, 2022, Source Music announced that the debut trailer planned for April 18 had been postponed to the April 19, without further explanation.[14]

To celebrate the group's debut and album release, an in-person showcase at Jangchung Arena was held on the same day as the album's release. The showcase was also streamed online through HYBE Labels' official YouTube channel & Naver NOW.[15][16]

The group performed the title track "Fearless" and the b-side "Blue Flame" at several music shows such as M Countdown, Music Bank and Inkigayo.[17] On May 10, 2022, they took their first ever music show win for "Fearless" on SBS MTV's The Show.[18]

The album broke the weekly sales record for a debut album by a girl group on Hanteo, selling 300,000 copies in its first week.[22] The album achieved great results on the Korean and Japanese charts debuting at the top of the Billboard Japanese Hot Album and reaching the third position on the Oricon Japanese Albums and the second position on the Gaon Album Charts.[23][24][25]

On May 16, 2022 an official merchandise kit called "The First Moment in Your Hands" was made available for pre-order in the Weverse Shop. The kit includes a brand tag, a postcard set and a sticker set.[34]

"The First Moment in Your Hands"
(Kit overview) 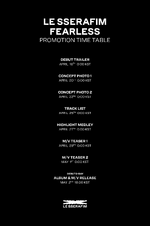 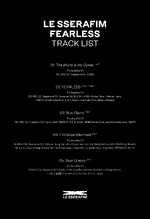 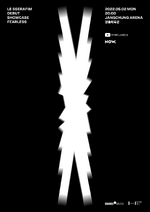 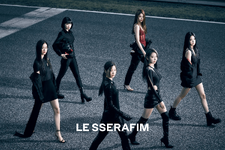 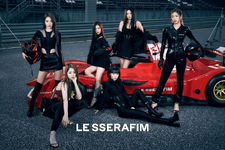 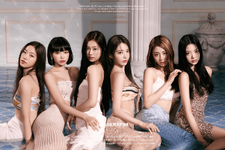 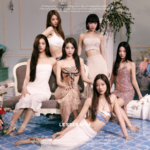 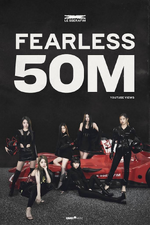 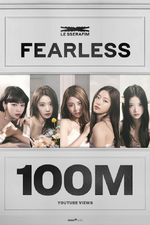 On May 2, 2022 exclusive behind the scene photos from the music video of "Fearless" were released through Genie and Melon.[39]