Voller
EvoL (이블) was a five-member girl group under Stardom Entertainment, now Hunus Entertainment. They made their debut on August 10, 2012 with the mini album "Let Me Explode!".

The group unoffically disbanded in 2015 after the departure of Yull, Hayana and J-Da. 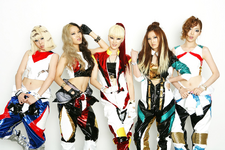 Retrieved from "https://kpop.fandom.com/wiki/EvoL?oldid=283703"
Community content is available under CC-BY-SA unless otherwise noted.