SM Entertainment
"Chu~♡" is the first single by f(x), and third single overall. It was released on November 4, 2009, with the title track used to promote the single.

"Chu~♡" was later included on Hot Summer, the repackage of the group's first full-length album.

"Chu~♡" was described as a "trendy europop tune that showcases a drum sound that is used in African music". The lyrics are about a girl who wakes up from slumber after receiving a kiss and is filled with curiosity and expectations of the world.

"Step By Me" was described as an "R&B track with a bright and cheerful atmosphere".

"You Are My Destiny" is a duet between Luna and Krystal, which was described as an "R&B ballad". 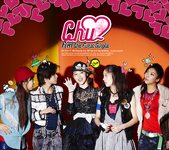 Retrieved from "https://kpop.fandom.com/wiki/Chu~♡?oldid=236027"
Community content is available under CC-BY-SA unless otherwise noted.