CAMILA (카밀라) was a three-member girl group under C.C Entertainment. The group consisted of two former LAYSHA members. They officially debuted independently on August 29, 2018 with the single "Red Lips".

In January 2019, the leader of the group, Choim, founded her own entertainment label called C.C Entertainment with the group signed under it as its only artist. Choim herself served as the CEO of the company. 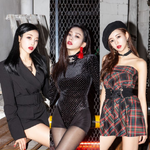 Retrieved from "https://kpop.fandom.com/wiki/CAMILA?oldid=249423"
Community content is available under CC-BY-SA unless otherwise noted.